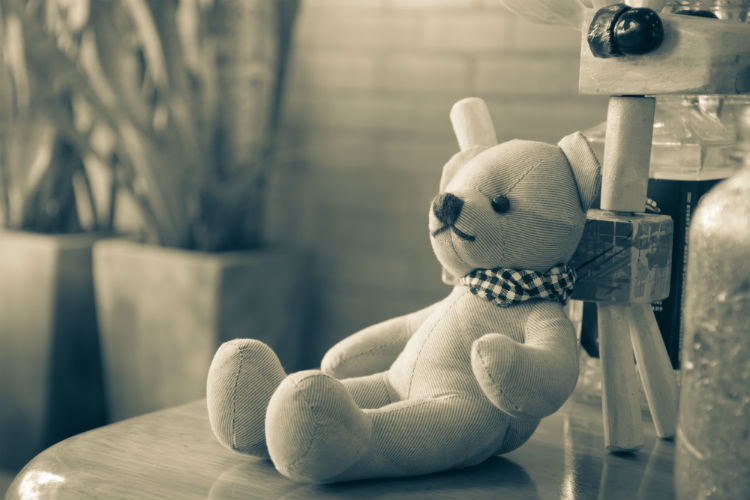 Could the comfort and safety of something associated with long-ago memories help Mum in the here and now? For Mum, growing older hasn’t meant growing out of the attachment to her special object.

A comfort object, transitional object or security blanket is an item used to provide psychological comfort, especially in unusual or unique situations, or at bedtime for small children. Among toddlers, comfort objects may take the form of a blanket, a stuffed animal or a favorite toy...

When my mother was very small, her best friend was “Edward Bear.” Apparently, she talked to him constantly.

By the time I came along, the old plush bear was pretty battered. His eyes were long gone, and his hind paws were unstuffed and unravelling.

For most of my childhood, he lived in the toy box with a moth-eaten golliwog, an inane knitted monkey and a pile of plastic dolls.

Occasionally, my siblings and I threw building blocks on top of Mum’s bear, but mostly we ignored him.

Several years ago, when our elderly parents had moved to rest homes, we began the daunting task of sorting out their house and readying it for sale. Someone found Edward Bear snoozing at the back of a wardrobe. We brought him up north, where he lived quietly for a couple more years on a shelf at my sister’s house.

A few months ago, Mum spied Edward Bear during a visit and asked to take him back to the rest home with her.

I’ve never heard Mum talking to him, but she tells me she does. All the time.

According to Mum, Edward Bear doesn’t say much, but he knows how to listen. He likes physical contact too—apparently a kiss on the nose is just the thing.

“Have you said hello to Edward Bear?” asks Mum. So I kiss him.

“He doesn’t like it when people ignore him,” Mum remarks. “When they’re gone, he growls.”

Mum reckons that getting Edward Bear back is the best thing that’s happened since she moved out of her home.

Six months ago, I conducted an experiment that ultimately failed. I moved Mum to a beautiful, spacious, purpose-built home on the other side of town. It has its own immaculate en suite (private bathroom), a luxurious adjustable bed and a room that is more than a tiny box. But it didn’t work.

Mum missed her friend Clarice and the small group of staff at the rest home we moved her into when she first lost her independence. She missed being close to family and living in an area she had known since before she started losing her memory.

Naturally, this week’s move back to her previous rest home was quite an event. For many older adults, moving can be rather nerve-racking—even traumatic. “Does Edward Bear know what’s happening?” I asked in the days leading up to it.

On the day of the move, we worked all morning shifting Mum’s stuff. We packed up and drove to her old rest home. Then we unpacked and tested her new bed.

We talked about where to hang her pictures, and then we opened the last box.

There was Edward Bear, lying on top of a nest of scarves. He was wearing a slightly imperious expression.

Where to put him? Mum looked around for a while, then sat him gently on the corner of the tallboy.

“I like this room,” she declared. “It has a very nice outlook.”

Then she looked at Edward Bear. “I think he approves.”