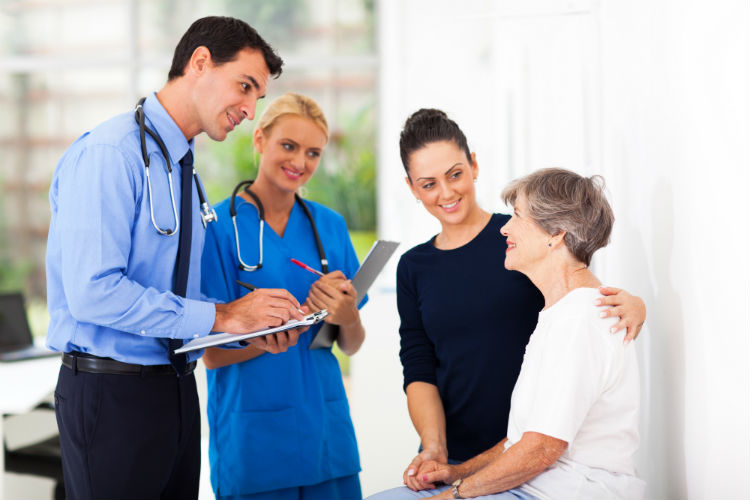 A frequent problem expressed among family caregivers is that their aging loved ones aren’t honest with their doctors. At home, they may gripe about intense pain, struggle to complete activities of daily living (ADLs) independently, or exhibit memory problems that lead to unfair accusations, but the moment they sit down in a doctor’s office, a change occurs. Like an actor on stage, the patient becomes animated and charming and has no complaints to report to their physician. What gives?

A Caregiver’s Experience With “Showtiming”

My mom was a supreme example. She fell in her apartment on a weekly basis and had memory problems. She was taken advantage of by unscrupulous telemarketers and suffered from digestive issues. However, whenever I took her to the doctor, all her hardships disappeared. What I called her “hostess personality” took over as soon as we would arrive at the office. While she may have complained of arthritis pain in the car on the drive there, the minute she had a chance to tell her doctor how terrible she felt, she became perkiness personified.

I’m not alone, either. A while back, a friend of mine took her mother to the doctor because she suspected her mom was in the early stages of Alzheimer’s disease. My friend sat dumbfounded as her mom charmed the socks off the doctor and seemed as quick as she had been 10 years earlier. Her mother denied having any health issues, especially those associated with memory. The doctor was too busy to run additional tests on someone who appeared to be “so sharp for her age,” so he signed off on some prescriptions and sent them on their way. My friend felt like banging her head against the wall.

Why Do Seniors Mislead Their Physicians?

While the reasons for a senior not being honest with their doctor are often multifaceted and difficult to pinpoint, fear, denial and a phenomenon called “showtiming” are usually to blame.

One reason our elders put on such a show for medical professionals is because they are afraid. They don’t want to face the reality of a bad check-up or a new diagnosis for many reasons. Hearing that one has heart disease, cancer, Parkinson’s disease or some form of dementia is devastating enough. But one of the most frightening consequences of such a diagnosis is a looming loss of independence. So, they put on their company manners, fail to mention or downplay their symptoms, and tell the doctor whatever sounds best in order to get out of there with the cleanest bill of health possible.

Fear of embarrassment is also a powerful motivator. Research has shown that people of all ages hesitate to share complete details relevant to their health with their physicians out of fear of judgement and/or embarrassment. Seniors have a great deal on the line and want to retain their dignity, so they avoid to divulging information that makes it seem as if they are physically frail or exercising poor judgement.

Denial is a natural and powerful tool for humans. It often helps us get through difficult situations until we can emotionally wrap our heads around an issue and tackle it. In the case of our aging loved ones, when they come home from a doctor’s visit without any major developments, they’ve dodged a bullet. Whether or not it is a conscious attempt, many seniors gather and direct all their effort into that one appointment, and it’s often enough to convince a doctor or other professional who isn’t privy to their daily behaviors and routines that all is well. It also doesn’t help that healthcare providers are pressed for time and cut appointments increasingly short these days.

Piggybacking off fear and denial, dementia can seriously complicate doctor’s appointments, leaving family caregivers utterly flummoxed and frustrated. Seniors in the early and middle stages of dementia sometimes use all their energy and what remains of their faculties to put on a rather convincing performance that they are fully alert and lucid. This phenomenon is commonly referred to as “showtiming.” The energy and concentration such an interaction requires usually leaves a dementia patient physically and mentally exhausted afterwards, sometimes for hours or even days.

The reasons for showtiming can vary, but fear and denial typically play a role. A very specific type of what many perceive to be “denial” is often to blame in dementia patients: anosognosia. This neurological condition is characterized by a lack of awareness of one’s own cognitive or psychological impairments. Changes in the brain render a senior with Alzheimer’s disease or another type of dementia incapable of recognizing their lapses in memory, loss of judgement and mood swings. Dementia patients with anosognosia will vehemently deny any memory problems or instances of poor decision-making despite being presented with concrete evidence of such. They may even deny other symptoms or health issues simply because they do not remember them.

8 Tips for Talking to Your Parent’s Doctor

Fortunately, there are some tips and tricks that family caregivers can use to ensure doctors are well-informed while their loved ones’ dignity remains intact. Start with the following strategies, but keep in mind that effective tactics will vary depending on a senior’s personality and medical concerns.