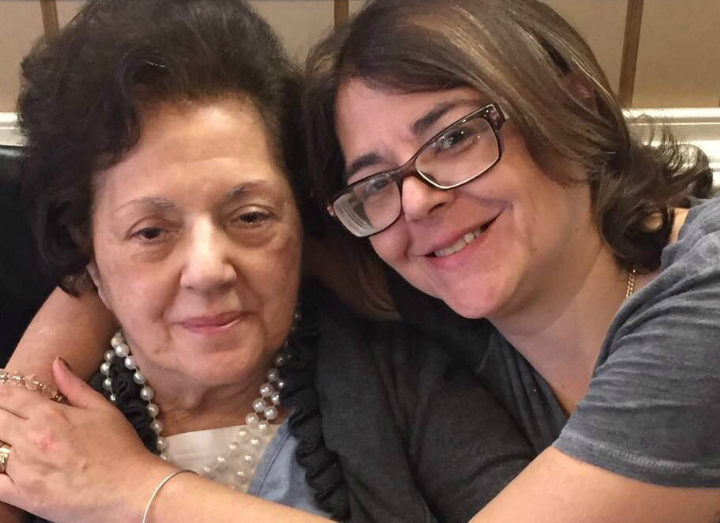 My Mom, Jean, has had dementia for 16 years now. Mom lived with me for many years misdiagnosed. Alzheimer's never crossed our minds or the doctors’. They attributed her symptoms to depression and bipolar disorder. She was finally diagnosed at age 58.

Dementia knows no boundaries, including age. We were all clueless. In 2005 after an ER visit and 19 horrid days in a psychiatric ward, Mom was diagnosed with a form of dementia. To this day, they are not sure whether it is Pick’s disease (a form of frontotemporal dementia), Alzheimer's disease, vascular dementia or some other neurodegenerative disease. But that is okay. As long as her symptoms are treated and she is comfortable, it's all good.

Mom was told she had less than three years to live and insisted on placement in a nursing home. My sister and I were furious, but had no choice but to respect her wishes. I guess she knew she was sicker than we did and she was protecting us. Always a mom...

But they were wrong. Mom is still here. Her decision to be placed was the most unselfish act of love I have ever witnessed. She did not want to "burden" her children when she had the option to live with either of her daughters. Mom was never a burden, but looking back, I understand why she made this decision. We are still her caregivers; we take care of her medical decisions and her physical and emotional needs, but most of all we get to be her daughters and love her.

I appreciate the care she receives from the professionals at the nursing home. The goal is to keep her safe, pain free and happy. Mom has not had it easy. The first facility was good while she was still able to care for herself in many ways, but as her disease progressed, they were no longer able to accommodate her. They over-drugged her without our permission, causing her to fracture her wrist and she spiraled into a tailspin.

We had to send her to a geriatric behavior center for 10 days. It was a difficult time, but the results were miraculous and we did get Mom back. We knew we could not take her back to the first facility, so we found her a beautiful new place. However, after only one day there, we were told Mom was not a good fit.

Mom's medical records said she had combative behavior and, even though it was corrected, it was very difficult to find a place that was willing to care for her. It took a lot of hard work, but we did find two facilities and chose the one we felt was best. She has been living there since 2010.

Change is very difficult on a dementia patient and has most definitely contributed to her disease’s progression. We had many good years with Mom and dementia. At one time, we were able to have her spend weekends in our homes, go shopping, speak on the phone, go to the movies and go out to eat. For a time it seemed almost "normal," except she lived in a skilled nursing facility. As time went on, things got harder and harder. She was no longer able to read or watch her favorite TV shows, and she had difficulty coming to family events and holidays. They just became too confusing for her. With each passing year, she lost more and more of her abilities.

Mom is now in the latter stages. She is confined to a wheelchair, spoon-fed with puréed food and has difficulty swallowing. But music has been a saving grace for her. She can barely put a sentence together, but if we play her favorite songs, she can sing them from beginning to end. Music is our way of communicating now.

To this day, Mom still recognizes her daughters and sons-in-law. She has forgotten those who have not visited her, whether they are family members or friends. Mom is the bravest person I know. She has fought this disease with dignity and grace every step of the way.

This past March, Mom had another bout with pneumonia. She healed quickly, but it has advanced her into another level of late-stage dementia. We are working with the facility and her doctor to find a way to keep her comfortable.

Almost 4 years ago, I found Memory People, an online Facebook support and awareness group founded by Rick Phelps for patients, caregivers and advocates. I am an administrator at Memory People and volunteer to support and spread awareness for dementia-related diseases. It is there that I learned to live the "new normal"—to live in Mom’s world because she cannot live in mine.

These days I appreciate the little things, such as a hug, a touch or a little smile. I never thought I could hate anything as much as I hate this disease. We were robbed. Mom was robbed. I miss my Mother. The pain of knowing you are losing your mind every day is just so cruel.

I fight back by giving support and spreading awareness. This is a lonely journey, so if you or a loved one is fighting this disease, please reach out for help.

The most important lesson I have learned on this journey is that dementia is not all-powerful. There is one thing this disease cannot take away from you, and that is love. Love is not a memory; it is a feeling that resides in the heart and soul never to be forgotten...