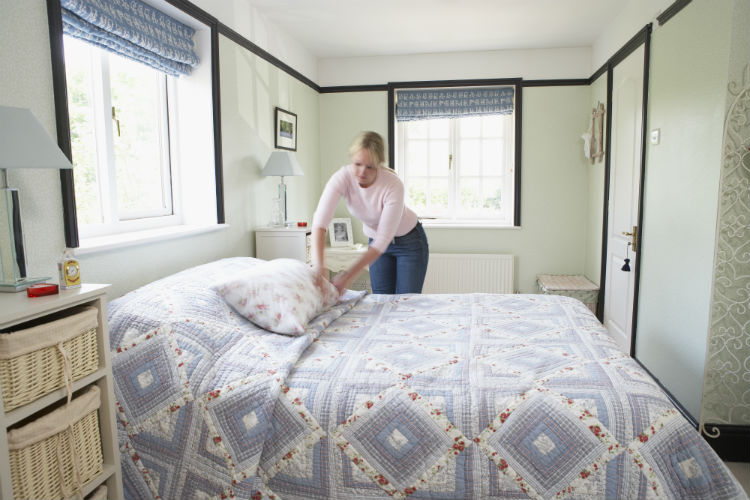 My dad’s frantic phone calls had become more and more frequent over the last 12 months.

The progression of Mom’s Alzheimer’s disease over the last eight years had been pretty much textbook. On one trip home, I found that she had lost her dentures somewhere in the house. When I returned only three months later, she appeared dirty and unkempt.

I was heartbroken and upset that my dad seemed oblivious to Mom’s awful physical condition. He said she refused to bathe and change clothes, and he didn’t want to argue with her. I got her cleaned up and called their doctor to fill him in. He ordered a certified nursing assistant (CNA) to come to their home once a week to monitor the situation and help bathe Mom.

These are not the things you think about when you are 29 years old and decide to take a job 800 miles away from your parents. Now, at age 50, I was trying to be a long-distance caregiver and balance life with my husband and an eleven-year-old.

It was tearing me apart.

Dad called me one night to say that Mom was hitting him and lashing out. She had been incontinent for quite a while, too, and he just couldn’t do it all anymore. The poor guy—he had been an engineer at the Alcoa Corporation for 40 years. Who knew that taking care of his wife would prove harder than any engineering project he had ever tackled?

He wanted me to come get Mom for a “visit” to my home as soon as possible. I was thrilled to take on the responsibility and started making plans to prepare the house and move my parents from Iowa to Colorado. I flew to Iowa to solidify the plan with Dad, but once I arrived, I realized that he didn’t want to relocate at 80 years old. I didn’t blame him, but it limited our options significantly. With a heavy heart, he finally admitted it was time for a memory care unit for Mom—someplace close to their home in Iowa.

That week, I set up appointments for us to tour dementia care facilities nearby. When we walked into the place that would become Mom’s new home, it just felt right. We were impressed with the staff and the selection of activities that were provided. They walked us down the hallway to look at one of the bedrooms, but Mom wandered off and began talking to the residents. Soon, she was helping push a lady in a wheelchair.

We walked into what would be Mom’s new room, and the quilt on the bed happened to be the exact same one that was on my own bed back home in Colorado. What were the odds that this place would have the same bedding as mine?

Sometimes with difficult care decisions, you just need a sign to help guide you. Fortunately, I got one. As hard as this process was on us, I knew deep down that it was the right choice for her.

When we got back to my parents’ house, I sat down at the kitchen table where Mom had served our family all those amazing home-cooked dinners over the years. It was there that I began the admission paperwork and intake forms necessary for her to start the next stage of her life. I knew in my heart that if she were aware of what was happening, she would approve.

The Process of Moving to Memory Care

The move-in date was set. My dad and I both cried so much in the days leading up to the move that it felt like we were grieving a death. Still, there was so much that needed to be done.

I gathered all Mom’s clothes and began ironing name labels into each garment before packing them up. Mom must have heard me crying because she came downstairs as I was working.

In a a rare moment of clarity, she called me by name: “Oh, Holly, don’t cry.”

“Mom, remember when you ironed labels in all my clothes before I started school?” I asked.

“I think so,” she replied tentatively.

“Well, that’s exactly what I’m doing for you now,” I assured. “They are going to look perfect! Just the way you did it for me!”

The afternoon of the move, Dad told me he couldn’t take her over to the facility because he was just too emotional. Instead, he’d go visit the next day once she was all settled in.

I still get choked up thinking about that tender moment. They were about to be separated for the first time in 52 years.

Dad stood in the front doorway, waving goodbye as Mom and I drove off. A few minutes later, we walked into the entrance of the memory care unit. The activity director greeted us and expertly whisked Mom off to karaoke so I could get her room all set up and decorated.

When I arrived at the activity center, Mom and the activity director were dancing to Elvis Presley songs, so I decided to stay and observe for a bit. Eventually, I tapped her on the shoulder to say goodbye, but she was still distracted by all the commotion going on around her. This is how she must have felt dropping me off at school for the first time, I thought.

A Smooth Transition to Memory Care

The next morning, Dad and I arrived early to see Mom. Miraculously, she was already dressed and well groomed. All the ladies were eating breakfast together, and Mom looked at us without a hint of recognition when we entered the dining room. I then realized that she had no comprehension whatsoever that she was not at home.

Later, as Dad and I were driving back to the house, I told him that he had really given Mom a priceless gift. He had been able to keep her home long enough so that by the time she entered memory care, she had no transition issues. Every moment was a new one for her now. It was hard on us, but not on her.

As we walked into the empty house, Dad said, “I guess she isn’t going to come back home, is she?”

We are still adjusting to the long goodbye.